Some feedback of the showing in St Petersburg, Tampa Gay and Lesbian Film Festival, US

Thank you so much for the wonderful film Lesbiana. We packed the theater at Baywalk in St. Petersburg, Florida (TIGLFF) . I took a friend who is new to our community, but an long time feminist and activist, especially "in the day". It was so wonderful to see the then and now of so many women familiar to many of us. Almost every time a new woman or a new event or community was featured, the audience response was immediate with clapping, cheers, whistles or a combination. Of course, the audience erupted when the Pagoda was featured. The electricity in the audience was palpable, I am so sorry you weren't here to feel the excitement. Women and conversations lingered after the movie, everyone was so fired up and animated. Women stopped their cars in front of the theater to make positive comments to me about your film. I was joined by several groups joyfully lamenting that the film was not enough, we all were greedy for even more. I could have easily stayed riveted for 4 more hours.  I feel as though you gave voice to our history that the younger lesbians don't understand or much care about in 2012. You certainly validated so many women, lesbians and feminists on that night in the theater in St. Pete. So many of us looked back on who we were and saw with happiness where are old friends and acquaintances have journeyed. Thank you so much for bringing our histories and women who made a difference back to us.
Cathy Everingham

We are really excited to be hosting the UK premiere of Lesbiana – A Parallel Revolution by Myriam Fougère.

In the wake of the civil rights, anti-war, and feminist movements, there was a groundbreaking wave of activism which changed the face of modern feminism. This movement was based on a simple yet radical idea: invent a new way of life entirely centered on women. A vibrant, productive lesbian culture came to life through innovative women who created physical and cultural spaces in which to live, meet, discuss, and organise this parallel revolution. They created literature, films, music, theatre, and a new body of political and philosophical theory, and numerous lesbian communities were established in diverse countries.

Lesbiana is a testimony to this unique moment in history when the lesbian movement was at its strongest and brightest. Through archive footage filmed by the director at the time, and present-day interviews with activists, the personal and political realities of that little-known time come to life. Lesbiana is sure to become a classic. 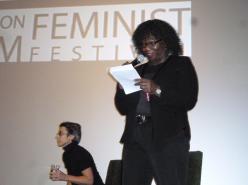 Too bad you cannot come to London. I will be there! I am glad that you are interested in the film, it is, I think, a good tool to bring odl lesbians and young ones together and talk about ourselves and our politics, etc. For distribution would you please contact GIV _Group Intervention Video, at Tél: (514) 271-5506 / Fax: (514) 271-6980 info@givideo.org Thank you, Myriam